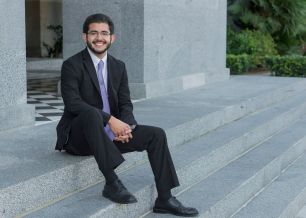 Carlos Martinez is a member of the 2015-2016 Judicial Administration Fellowship cohort. Originally from San Diego, he graduated from Santa Clara University in 2015 with a B.S. in Political Science and minors in Music and Sociology. While at Santa Clara, he studied public law in Washington, D.C., interned at the Public Defender’s Office, and volunteered at a children’s orphanage in Nepal. He currently works at the Habeas Corpus Resource Center as a Capital Defense Investigator for the state of California.

“The Judicial Administration Fellowship was an invaluable experience that shaped my current understanding of our state’s judiciary. I entered the Fellowship with a passion for indigent defense but no substantial experience in the judicial system. To me, the courts were an intimidating and complex maze of processes that were unintelligible. While I was right about the judiciary’s complexity, the fellowship’s combination of a court placement with monthly academic seminars made these complexities both understandable and relevant. My court placement granted me the flexibility to study and participate in court services that assist indigent populations, and the academic seminars studied these specific services in the context of the state judicial branch. I am currently a capital defense investigator for the state of California, an especially niche field that involves complex judicial administration spanning decades. My fellowship experience not only prepared me for some of the administrative realities of capital defense, but it also provided a broader understanding that helps me better explain the process to the affected populations I work with. I’m not sure if I would have the same level of understanding if not for my fellowship experience.”

More information about the Capital Fellows Programs including the online application can be found on our website.  Apply now! 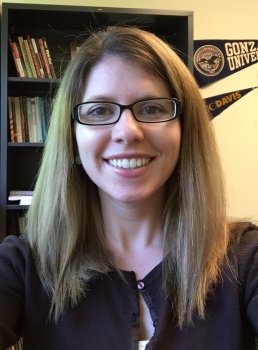 Needless to say, the 2016 election season has been historic and memorable for many reasons. Nationally, many political pundits and pollsters are wondering how so few predicted Donald Trump’s victory, Republicans retained control of the U.S. Senate and House, and the national tide appears to be leaning conservative. Yet in California the election was marked by few surprises and further confirmation of California’s status as a blue state: Hillary Clinton won California’s 55 Electoral College votes, the U.S. Senate race in California was a contest between two Democrats, many progressive statewide ballot measures passed, and Democrats kept majorities (and may win supermajorities) in both the state Senate and Assembly. Although California is not a uniformly blue state, with a political divide between rural inland areas and populous coastal areas, many statewide contest results are contrary to more conservative national trends.

Hillary Clinton won California’s 55 Electoral College votes with 61.5% of the statewide vote. Compared to the 2012 presidential election, Clinton won California by a higher percentage than President Obama: Clinton won by 28.3 percentage points compared to Obama’s 23.1 percentage points. As in recent presidential elections, however, support for the Democratic candidate was not uniform across the state. Clinton’s support comes primarily from coastal counties, particularly in the Bay Area and Los Angeles: 85.3% in San Francisco, 79.0% in Alameda County, 73.2% in Santa Clara County, and 71.5% in Los Angeles County, for example. A reflection of nationwide trends in 2016, rural areas in California favored Donald Trump. Trump won many Northeastern and Central Valley counties, some with resounding support: 72.3% in Lassen County, 71.8% in Modoc County, 60.4% in Amador County, and 56.3% in Kern County, for example.

Unlike many highly competitive U.S. Senate races around the nation in 2016 and thanks to the top-two primary, California’s election for the U.S. Senate seat to replace retiring Senator Barbara Boxer was between two Democrats. California Attorney General Kamala Harris easily defeated Congresswoman Loretta Sanchez 62.5% to 37.5%, with Sanchez only winning Glenn County and Imperial County. As an African-American and South Asian-American woman, Harris will be the first biracial woman and second African American woman in the U.S. Senate.

Proposition 64 passed with 56.0%, legalizing recreational marijuana. The law went into effect immediately after Election Day, but the state has until January 1, 2018 to issue marijuana business licenses, and cities and counties may enact laws banning commercial marijuana businesses in their jurisdictions. Although marijuana consumption now is legal in California, there are restrictions such as prohibiting public consumption and limiting use and possession to adults over age 21. California is now one of seven states and the District of Columbia that has legalized recreational marijuana. Proposition 56, which increases taxes on tobacco products such as cigarettes, cigars, and e-cigarettes, passed with 62.9% and will go into effect in April 2017. With the passage of this tax increase, California moves from a state with one of the lowest tobacco tax rates to one of the highest in the nation at $2.87 per pack of cigarettes.

Fifty-two percent of Californians voted to ban single-use plastic bags (Proposition 67), approving a statewide ban Governor Brown signed into law in 2014. The statewide ban is in effect as of the day following the election, although this ban will not impact residents of the approximately 150 cities and counties that already ban single-use plastic bags. Proposition 65, also put on the ballot by the plastic bag industry, potentially to confuse voters, failed with 55.3% of Californians voting “No.”

Two of the measures voters rejected are Proposition 60, which would have required performers in the adult film industry to use condoms, and Proposition 53, which would have required voter approval for public projects using revenue bonds over $2 billion. Proposition 53 was opposed by Governor Brown, along with many local governments and public works districts. Californians approved Proposition 52, which makes a Medi-Cal fee private hospitals pay permanent. Proposition 59, an advisory measure calling for a constitutional amendment to overturn the U.S. Supreme Court’s 2010 Citizens United ruling, passed but will not change federal campaign finance law. Proposition 54 passed with 64.3% in favor, requiring proposed legislation to be in print and available online for three days before lawmakers vote. It also requires videos of all public meetings to be available online.

Contrary to liberal trends of other statewide ballot measure preferences, Californians rejected repealing the death penalty (Proposition 62 failed with 53.9% of Californians voting “No”), and supported streamlining death penalty procedures (Proposition 66 tentatively passed narrowly with 50.9% of Californians voting “Yes.” Note that it is considered one of the Secretary of State’s “close contests” – see next paragraph). Opponents of Proposition 66 already filed a suit requesting the state Supreme Court stop the proposition from taking effect. The most expensive statewide ballot campaign this year, Proposition 61, failed with 53.7% of Californians voting “No.” Under Proposition 61, state programs could pay no more than what the U.S. Department of Veterans Affairs (VA) pays for prescription drugs. The opposition campaign took advantage of uncertainty regarding how pharmaceutical companies would react, and argued that it could lead to higher costs for veterans and seniors.

Results are not official yet

As of today there remain a few “close contests,” defined by the Secretary of State as races with a less than 2% difference between “Yes” and “No” votes for ballot measures or between the top two candidates. These races include Proposition 66 (Death Penalty Procedure Time Limits), U.S. House District 7 (Ami Bera versus Scott Jones), State Senate District 29 (Josh Newman versus Ling Ling Chang), and State Assembly District 65 (Sharon Quirk-Silva versus Young Kim). Vote-by-mail ballots (which may arrive to elections officials up to three days after Election Day and be counted), provisional ballots, and damaged ballots are processed after Election Day. County elections officials have approximately one month to process, count, tally, audit, and certify their final results. The Secretary of State certifies results for presidential electors by December 10, 2016 and all state contests by December 16, 2016. You can find updated, official election results on the Secretary of State’s website: http://vote.sos.ca.gov/.

The Assembly, Senate and Executive fellows class of 2016-17 arrived in Sacramento for the start of their fellowship last week.  The fellows are currently immersed in orientation and activities such as All Fellows Day and Ag Day.

All Fellows Day is a particularly dynamic event that brings together all four Capital Fellows Programs under one roof to engage in leadership training, professional development and team building exercises.  Takeaways from the training include improved communication skills, an increased ability to take risks within the group setting, and learning how to “break down silo’s” and increase connectivity, productivity, and engagement within a group setting.  Fellows also had the special opportunity to hear from State Librarian Greg Lucas who engaged the group in a lively discussion about California and its rich history.

Ag Day is another exciting opportunity for Fellows to explore the California Central Valley’s rich agriculture roots.  Fellows began the day at Soil Born Farms learning about community gardening and the efforts this local company puts into engaging young children in healthy eating habits.  The group then traveled to New Hope Dairy in Galt.  New Hope Dairy is a large scale production dairy – generating nearly 14,000 gallons of milk per day!  It is also home to a partnership with the Sacramento Municipal Utility District (SMUD) in the form of a dairy digester.  The digester is located onsite at the dairy and converts methane and other bio waste into clean energy to be used to power homes in the Sacramento region.  Fellows ended the day at the Lange Twins Winery in Lodi where they continued to learn about sustainable farming practices and the wine industry.

Applications are now open for the Capital Fellows Programs.  Apply now to be a part of this exciting and rewarding opportunity in public service. 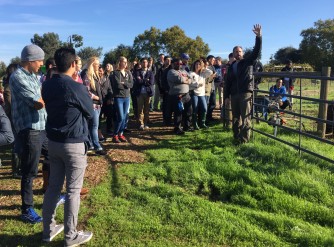 Fellows attend a briefing at Lange Twins Winery in Lodi 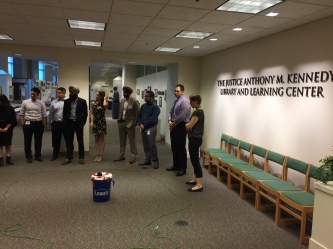 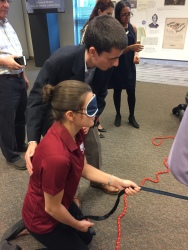